Valay Gada (b. in 1980) graduated from NIFT in 2008 after a BA in English Literature. As a sculpture and product designer – he applies his thoughts and concepts equally to both, creating installations, sculpture and organic functional works of art for diverse spaces. Valay’s inspiration stems from preserving and adapting India’s craft tradition in harmony with nature.

His work reflects his concerns with the impact of urbanisation and climate change eroding the natural world. He seeks to beautify the internal landscape with form over function based on organic shapes. He works primarily in metal alloys and increasingly sustainable materials including recycling and renewables.

He has participated in over 10 art shows held in London, Frankfurt, Manchester, Mumbai, New Delhi, and Chennai. He was awarded the ‘Elle Décor’ International Design Award (EDIDA) Young Talent of the year 2014 and ‘Trends’ Excellence in Architecture and Design Award 2016. He has been widely written about in a range of art journals, design magazines and press as an “artist on the ascendance” including the Architectural Digest, Harper’s Bazaar, Times of India, India Today, Elle Décor, etc. He lives and works in New Delhi. 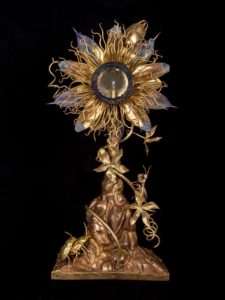